How long could you last, naked in a blizzard?

Naked in the snow

This is our second go at bringing Lydon from Dorkside Fitness into the snow, stripping him down, and then taking some cool recreations of the Weapon X storyline in near to subzero temperatures....

What are we doing out here?

Lydon (Dorkside Fitness), has made it his goal to be the best Wolverine he can be, recreating the man from the comic books that is the "Best at what he does".  It began as just normal cosplays, but then it became progressively more elaborate, with more costumes and often video.

And sure, the cool cowl, unique hairdo, fancy claws, thats all great, but how can he be the best Wolverine he can be, if he skips the beginning?

And thats how we get into the snow, the desire to recreate the Weapon X storyline (you can read it in the anthology series, though I read it on my comixology account).

In the comics, Wolverine, a down and out soldier who happens to be a mutant with a Healing Factor, gets kidnapped by a mysterious agency who promptly begins experimenting on the guy. In addition to giving him unbreakable adamantium bones, they also brainwash him, turning him into an unstoppable murderer. 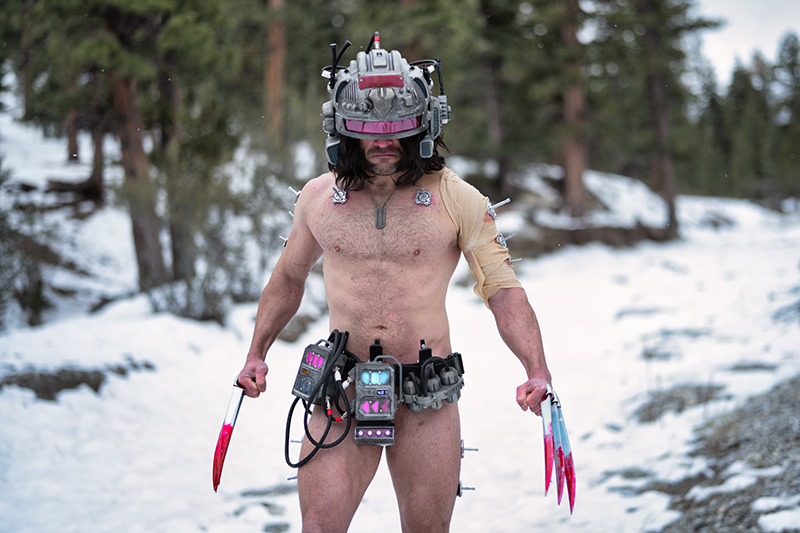 To test their control and his abilities, they send him out into the frozen Canadian arctic and have him kill progressively more dangerous opponents.  Unfortunately, while it would have been cool to do some sort of cool shoot with wolves and polar bears, obviously we didn't have that kind of budget, but we DID have victims, I mean volunteers! 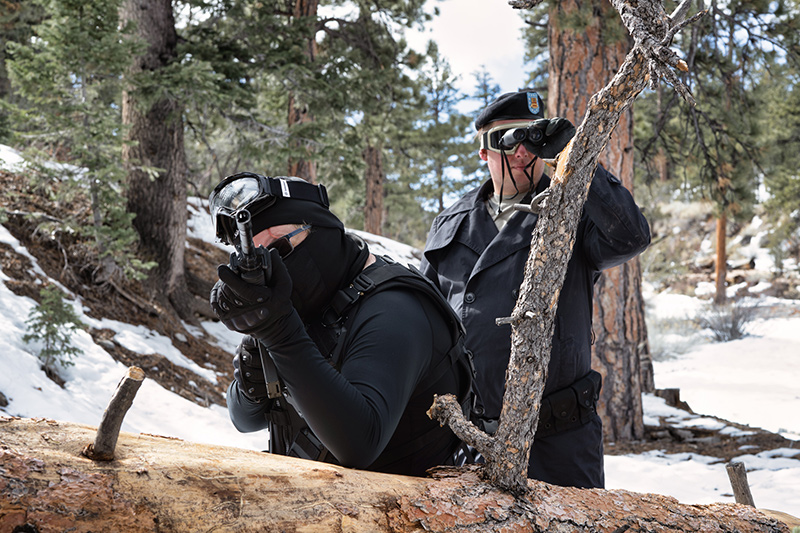 I had this idea that we could get some wolf or bear pelts, fake or whatever, but I just couldn't find any that I thought would look good, that I could justify pouring fake blood over and probably ruining on the first shoot.  Still, if you want to donate to the cause, by all means, send me animal pelts (real or fake), and we'll make something happen!

How many times are you going to do this shoot?

Until we get it right of course!

Yes, we've done this shoot before, but the first time, we had tentatively explored the idea that Deadpool and Psylocke went through time to recover Wolverine for some reason.  Psylocke is a psychic, it makes sense she might be able to manipulate Wolverine, and Deadpool has a Healing Factor too, so he could survive being ravaged while Psylocke works on him. 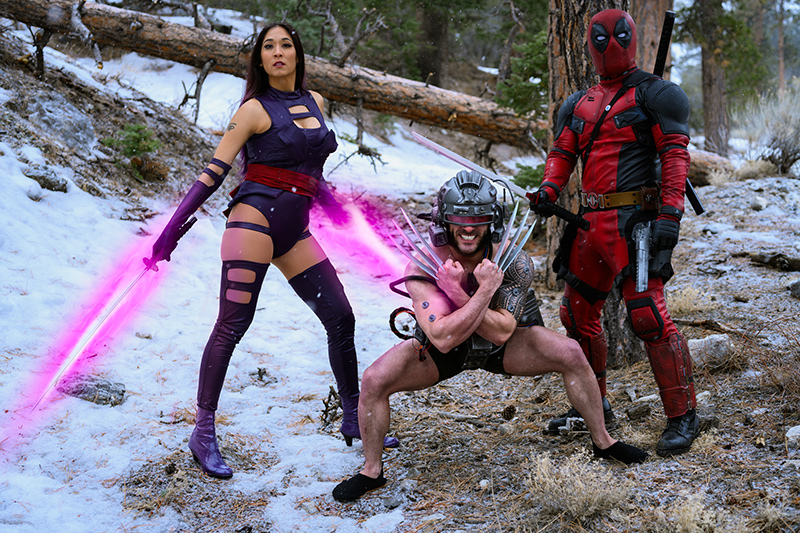 So like I said, we didn't have any animals to fake kill, so instead we decided to explore the relationship between Weapon X and Department H.  Department H is running the experiment, so their people are just following along making sure Weapon X's mind control is operating properly. 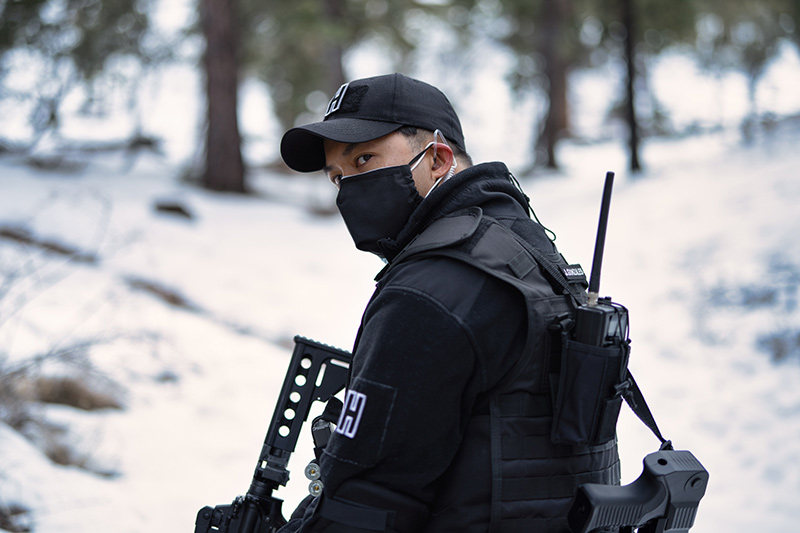 So Department H wants to test Weapon X versus real opponents, and eventually (spoiler...for a 20 year old comic), turns him on his Department H handlers to see how effective he would be.

But before that, I thought why not have Weapon X kill some random mercs? I thought it made sense, mercenaries being disposable, so we have these two guys calling in asking for direction, then ultimately getting murdered by Weapon X. 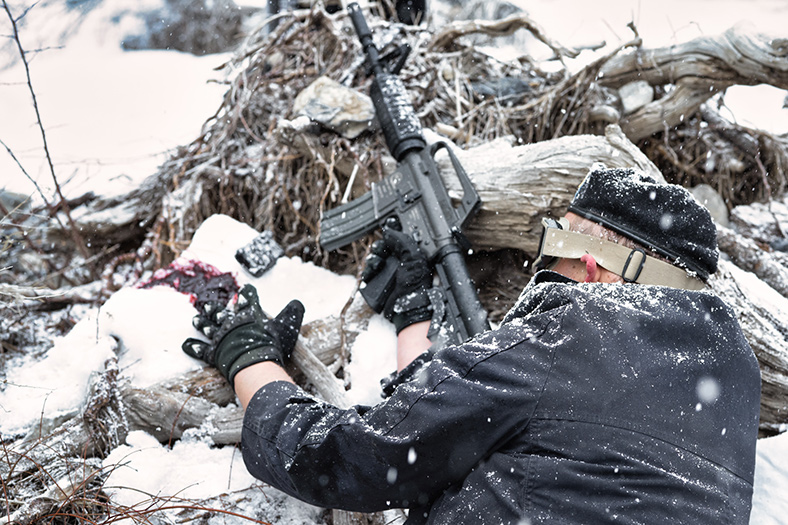 So no more cold?

Well, we were intending to be done here... but unfortunately we encountered some problems.

To our credit, we weren't expecting the blizzard to dump several inches of snow right when he was ready.

Also, we weren't expecting 40 mile an hour wind gusts constantly putting out the pilot light on our portable heater.

So, we're doing it again, but this time, we're going to do some extra tricks.

Our plans include a large variety of strategies, all of which, we're hoping will allow him to be out in the cold long enough, that we get plenty of both good photos and video.

We're expecting to get a lot of good results, but nothing is going to change the fact that he's going to be 90% naked, in the snow, up in the mountains.

But is it worth it?

What is it all for?  I don't know, mostly just because we love this stuff.  We love bringing these stories we grew up reading to life, and its good practice for our own stories that have yet to be brought out into the world.

Ultimately, we're taking a lot of this footage and putting together something like what's below.  If you want to see more, maybe join our insiders club